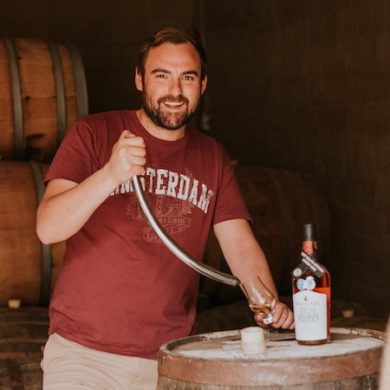 The Boplaas relationship with spirits production goes back 140 years, when in 1880 the first order of Boplaas potstill brandy was sent by ox-wagon from the Klein Karoo to Cape Town harbour for shipment to London.

Just over 100 years later Carel Nel fired up Boplaas’ copper still again in 1989, after it had been dormant for almost 70 years. Then, five years later, in 1994, South Africa’s very first estate pot still brandy was produced. It is a source of pride for the farm that this very Boplaas 5-Year Old Pot Still Brandy was served at Nelson Mandela’s presidential inauguration banquet.

Since then Daniel Nel has joined this close-knit family business as sixth generation distiller, and extended the Boplaas range of spirits to include three premium whiskies and three gins. Boplaas prouds itself on the fact that its whisky is made exclusively from 100% South African-grown maize, which is world renowned for its quality and flavour. "We will only use the very best for our range of whiskies," says Daniel.

Water is a cornerstone of whisky-making and at Boplaas they use the highest quality from crystalline streams that flow from the snow-capped Swartberg mountains. This same source gives life to plants, animals and people of the Klein Karoo.

The Klein Karoo’s warm,  dry climate optimises the interaction of spirit and cask wood, allowing for higher extraction of flavours and deeper ageing. The annual evaporation is in excess of 5% per year compared to 1-2% in the Scottish Highlands, but in exchange for this higher loss the Boplaas whisky gains in super-smoothness and concentration.

"We use ex-Bourbon casks, leaving the whisky to mature for five years. This gives it a creamy mouthfeel with toffee and vanilla notes. The whisky is then transferred for 'finishing' to different barrels which provide a new range of flavour expressions: French oak barrels that once held Tawny Port give extra depth of flavour in the making of our 6-Year Old Tawny Port Cask Whisky. Port casks are among the rarest to come by as some of the world’s most sought-after whiskies are aged in them," explains Daniel, concluding, "as a producer of port wine which is consistently voted South Africa’s best and highly rated internationally, we’re naturally happy to use the best selection of our own with which to finish our whisky!"