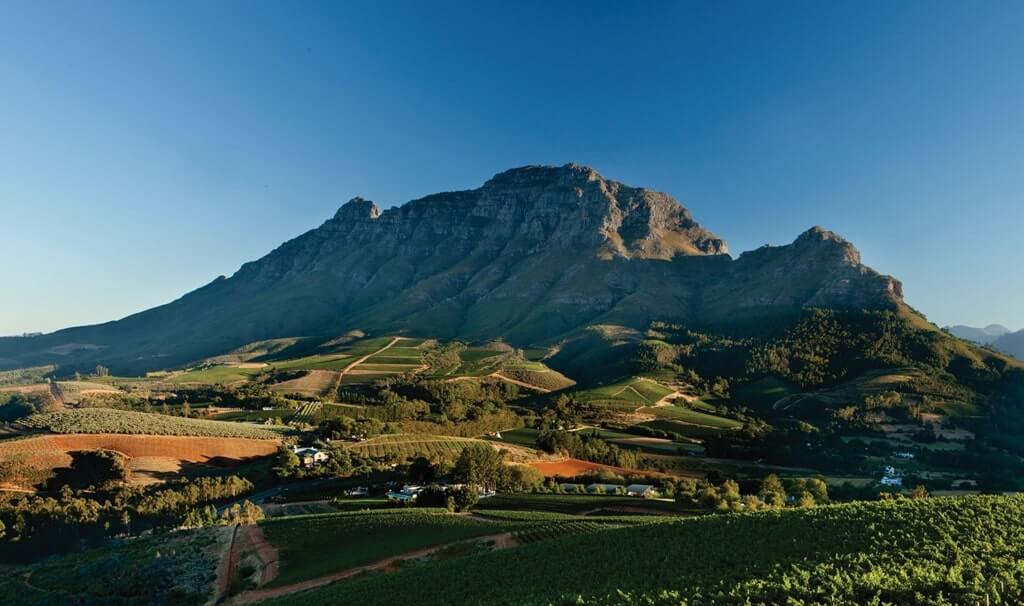 Despite its excellence, South African brandy has an image problem, at home and overseas. But, as Tom Bruce-Gardyne discovers, it has some passionate producers keen to fly the flag for the sector. Looking back, few spirits‐producing nations have had it quite as bad as South Africa in the year of the plague

While off‐licenses were deemed ‘essential’ in the UK and remained open during lockdown, alcohol sales were banned by the South African government on 17 March 2020. The ban was lifted on 1 June, only to be brought back six weeks later, making South Africa the only country in the world to reimpose full prohibition. And if that weren’t enough, the government twice banned alcohol exports for around five weeks in total.

“Not only were exports halted, but we couldn’t even move alcohol,” says Christelle Reade‐Jahn, director of the South Africa Brandy Foundation. For a while it meant distillers were unable to transport wine from the wineries to their distilleries, which risked a lot of it going bad because the rules forbid adding sulphites as a preservative. Undaunted, the distillers switched to producing the hand sanitiser that was urgently needed by hospitals and frontline workers. “It was incredible to see all the competitors pull together and say ‘now, we’re going to save lives’,” says Reade‐Jahn.

“Like Charles Dickens wrote, it really was ‘the best of times and the worst of times’.” The country’s off‐trade reopened on 17 August, but only from Monday to Thursday, 9am‐5pm. In the view of Nuno Fernandes, KWV’s spirits marketing executive: “It’s very hard to predict how the market’s going to react.” When the initial prohibition ended in June, he says: “We went from zero sales for two months, to doing three months’ sales in one month. We sold so much we were actually ahead of last year.” Sadly, the second time did not provoke the same rebound.

Last year, according to IWSR, South African brandy accounted for 2.75 million cases in its home country, compared with 197,000 cases for Cognac. The category is extremely bottom‐heavy, with 70% in the ‘value’ and 23% in the ‘standard’ price band. Both concern the sub‐category of blended brandy – a mix of pot still brandy and up to 70% unaged grape spirit, which is typically mixed with Cola, and whose dominant brands are Distell’s Viceroy and Commando. Above is the small category of vintage brandy – blends that are at least eight years old, and above that sits pure pot still releases, such as KWV 10‐year‐old and Distell’s Van Ryn.

‘“Since the market reopened, we’ve seen some surge buying of brandy and spirits in general, but volumes are lower than in previous years, given the impact of the ban,” says Mncedisi Jekwa, Distell’s category marketing head: brandy and liqueurs.

Whether recent short‐term growth can be sustained is unclear, he explains: “Consumers are uncertain that the trade may be closed again. There is a sense of panic buying, which we strongly discourage, and tell people to be sensible, modest and responsible in purchase and consumption.” That said, the economic fallout of Covid‐19 is believed to favour what he calls “value brands, which consumers have known and trusted for a long time”.

With South Africa being such a melting pot of cultures and ethnicities, individual brands are often caught up in that. “I would say Viceroy and Commando have a very strong connection with South Africa’s Xhosa culture.

Other brands have a strong connection with an Afrikaans culture. It’s something that has happened over time,” says Jekwa. “We’re trying to make brandy more multi‐culturally accessible. It will take time, as it requires undoing certain stereotypes and perceptions around brandy in South Africa.”

Fernandes says: “The image of brandy is a challenge, especially in South Africa, though it’s a global image of being seen as a cheap and uninspiring category, unless you are Cognac. And in South Africa we’ve got the added dynamic of racial and cultural differences, which drives much of the brand preferences.” The brandies you will find in a typical tavern in the townships won’t be the same as the ones in an Irish pub full of Afrikaans drinkers.

There is also a regional dynamic, with the Eastern Cape being “a big brandy region” while in the province of Gauteng, which includes Johannesburg, “it’s whisky, and now gin” that is popular, says Fernandes.

“Our KWV 10‐year‐old is an aspirational brand in the Eastern Cape,” he continues. “It’s like Glenfiddich or Hennessy, and it’s doing very well there. But if you go to Gauteng there’s very little knowledge or appreciation for quality pot still brandy. In Gauteng they don’t drink brandy in the high-end on‐trade, it’s not cool.” And, sadly, for all its esteem in the Eastern Cape, the 10‐yearold
commands a price of just under R300 (£13.90) compared with R450 (£20.80) for Hennessy VS, which spends a fifth of the time in wood.

For Reade‐Jahn, this doesn’t seem fair. “We learnt our pot still brandy from the French, so it undergoes double distillation in copper pots and a minimum three years’ maturation, which is actually more than the two‐year minimum for entry level Cognac,” she says.

“Our pot still brandy is every single bit as good, but we have not managed to actually create that aspirational perception in our market, or in the rest of Africa, where Cognac sales are absolutely massive.”

As well as the raft of international trophies won by the category, she mentions her own experience of doing blind tastings with chefs: “We pair a pot still [brandy], Armagnac and Cognac with each course, and I would say 95% of people prefer the pot still.”

Having a global rap star behind your brand clearly helps, but for that you need an LVMH sized budget. “When Drake brings out a Cognac you understand the level at which they can play,” says Reade‐Jahn. “The day I get someone like that to bring out a pot still brandy is the day I can retire gracefully.” The only South African brandy that has tried the celebrity route is Oude Meester, which hired the Hollywood actor Jamie Foxx for an ad campaign, followed by Idris Elba in 2014. 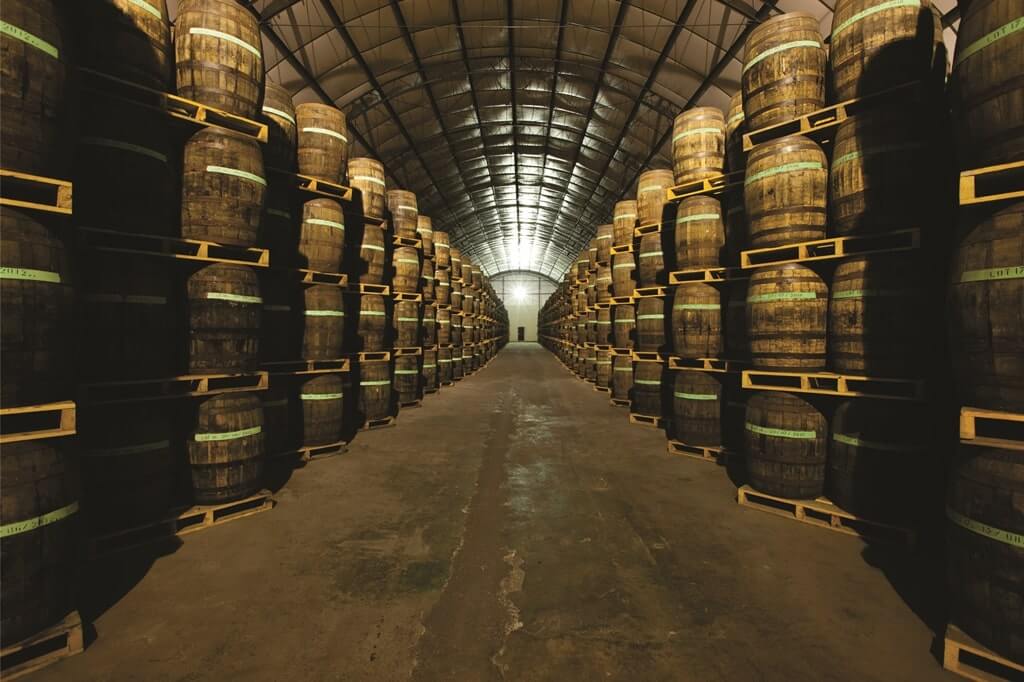 ‘Our pot still brandy is every single bit as good as Cognac, but we have not managed to actually create that aspirational perception in our market, or in the rest of Africa, where Cognac sales are absolutely massive’

By then Scotch whisky was poaching middle class consumers from brandy with the help of an EU free trade deal that ended import duties on whisky in 2012.

More recently, the category has been squeezed hard by the surge in gin, which has inspired a whole new cottage industry of craft distillers. It is an area the South African brandy industry is keen to play in, though as Reade‐Jahn says, compared with gin “the barriers to entry are just so much higher, in terms of copper pots, French oak barrels and maturation.

“Not only do you need to lay your cash down for at least three years, you’ll be losing an angel’s share of 3% a year.” The big producers have been offering the start‐up distillers mature brandy they can infuse with botanicals if they like, but so far, no craft brands have broken through.

While the gin craze has ramped up the competition, it has given Jekwa some cause to be optimistic.

“Ten years ago, if you told me that gin would be the fastest‐growing category in South Africa, I’d have said ‘no way’,” he explains. “It had a dated perception, with similar challenges that brandy is dealing with now.

“I really believe that brandy will have a resurgence because of its authenticity of being proudly South African and because of its high‐quality, award‐winning products. But I believe it’s going to take new thinking and innovation in the future to change and modernise brandy.”

For now, exports of South African brandy account for less than 10% of production and are focused on the rest of Africa. Reade‐Jahn feels the industry should try and “position it in China and the US as a credible alternative to Cognac, and that will then reflect back locally, and people will say ‘goodness they’re drinking all our brandy, we’d better wake up’.” It could certainly compete handsomely on price with its French rivals, and you’d imagine the weakness of the rand would help. Fernandes disagrees, however, and says: “You can’t build a business on that, because it does fluctuate massively. I almost wish we had a slightly stronger currency, but that it was stable.”

Some 17% of KWV brandy is exported, half of it making its way to other African countries, of which “Kenya looks the most interesting”, says Fernandes.

“Our only chance we really have to get our brandy going globally is to focus on our pot still brands at the top end, which will be expensive, and it’s going to be slow.”

Right now, like everyone, he’s just hoping that there is not another return to prohibition.

‘I really believe that brandy will have a resurgence because of its authenticity of being proudly South African and because of its high-quality, award-winning products’

[Article reproduced with the kind permission of the South African Brandy Foundation and www.thespiritsbusiness.com